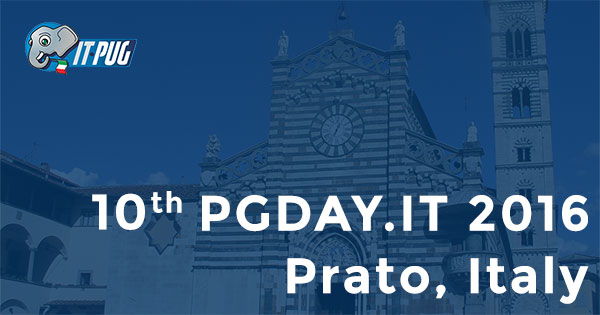 Last week I was in Prato attending the 10th PGDayIT, the longest running European PostgreSQL conference. And this was my 3rd one, every one as a speaker. For this 10th I had two talks (thanks to Gianni Cioli). And just like pgConfEU this has become like a mid autumn tradition for me, get there, meet all the people that you see once a year, get a chance to speak italian and see Florence.

I bought all the bus/train tickets one month before the event because they are cheaper that way. It was very difficult to find good connections this time because they changed the train schedule so I couldn’t use Trieste as my return point because the train arrives there too late so I have no more buses home. So I switched to Mestre and got even cheaper tickets. But, once there I had to wait 4 hours for the connecting train. And that train was canceled. As it turns out on that day there was a strike and many trains were canceled. With a little help from the Trenitalia clerk I got on the first regional train to Bologna and from there to Prato. 3 hours late, but I got there.

And to make things worse, the night before we started a data migration that caused some problems during the night. When I saw the emails with the errors I was just crossing the border into Slovenia. How do you fix problems remotely without internet connectivity? Maybe they have free WiFi on the bus station, or on the train station, or in the McDonalds cafe on the train station? No, there is no free WiFi, anywhere. So I had to wait until 20:30 when I arrived in the hotel to investigate and fortunately fix the problem.

The next day I had a nice walk in Florence. As this was my 3rd time I already knew the fastest way to get there and I know the city layout so I managed to see it all and also to buy some presents for the pending festivities. It was a pity that on the day I had the least time to see Florence the weather was so nice. The previous years it rained all the time so I didn’t had a chance to enjoy it fully. There was a light festival happening the entire month, Flight - Firenze Light Festival 2016, but I had to return to Prato before the nightfall for the social event at the Camelot 3.0 bar. Maybe I will have the time to see it more before I leave.

A walk in Florence

Photos from my walk in Florence

The conference started at 9, and I went first for the registration desk to get the badge and the other goodies. I was a little bit nervous because I had tried my second presentation only 2 times, the day before and early in the morning. But all my friend from last year were there so we started talking and that took my mind of the worry. But something was strange, at 10 the place still looked empty. As it turns out, the conference has been postponed to December so a lot of people couldn’t come because the end of the year is usually the time companies wrap thing up before the next year.

I did my best on my first talk Don’t Touch that Parameter, and it went ok. I only had some problems doing the live demo, but I managed to do it before my second talk.

The second talk, PostgreSQL Horror Stories Vol.1, was even better. I asked my friend Saša (Undertoon) to make a couple of images for the presentation, and he overdid it by creating animations which were incorporated in the presentation. Judging by the audience response, the talk and animations were a perfect hit. I just had some minor problems with the Flash animations.

Lessons learned: Flash animations in PowerPoint do not work if you are not connected to the Internet. Even if the files are on your drive, next to the PPTX file.

Beggining of the conferenceMy first talk - Don’t Touch That ParameterUpgrade or not upgrade… this is the question!PostgreSQL su NFS: miti e veritàTeaser for the PostgreSQL Horror Stories Vol.1 talkReady for the big event in the talk.Conference photo

A few photos from the conference

As it was only a one day conference, and I was able to attend only a few of the talks, it is hard to choose my top picks. They were all good in their own way:

The conference ended in the mid afternoon so I had a drink with the participants and my friends from 2ndQuadrtant. There is another conference in Italy in June in Milan, 5432…MeetUs!, for which I am constantly reminded to come every time I talk with Barabara, and next year I might just come if I manage to get a good topic for a talk before the call for papers ends.

After the drinks I got the idea to visit Florence once again to see the Lights Festival. I hoped that I could go there and do a fast tour before the last train for Prato leaves (at 00:25). I took some photos to remember Florence by night.

Photos from the Florence Lights Festival

Some photos of the fantastic illuminations of the city

For a one day conference it was really a good one, packed with a lot of good talks. Even more information you get talking with the people there. It will be a couple of weeks until I manage to try everything I heard there.

It is time to return home. Good bye Prato, see you next year.

All my slides of the presentations held on the conference are available in this BitBucket repository.